In the many years that I have spoken to audiences about Internet Border enforcement, I always enjoy receiving the comment from an audience member that usually goes something like this: "But these enforcement efforts are not effective. I can simply use [a VPN] / [a proxy server] / [the TOR network] / [whatever] to get around the restriction."

I often congratulate the person who makes this comment on having become a successful "Internet smuggler" - someone who breaches a border control for their own purposes. If the mood in the room is especially light, I might even suggest that the person in question probably also knows ways of hiding contraband in their luggage to evade discovery by border officials who otherwise would stop it from entering the country.

Of course I do not believe that any of my audience members are smugglers in the "real" world. My primary point is to demonstrate that the idea of breaching border controls for fun or for profit is nothing new. Smugglers have existed for as long as authorities have attempted to enforce borders.

A typical example of some early (and overly-exuberant) reporting about the ease of Internet Smuggling, can be found in this Washington Post Article from October 2009: "On The Internet, Nobody Knows You're Not In The USA", available HERE. The article specifically mentions one of my favourite online border enforcers: HULU.

While working in London, England this year (2013) here is the notice I received when attempting to obtain content from HULU: 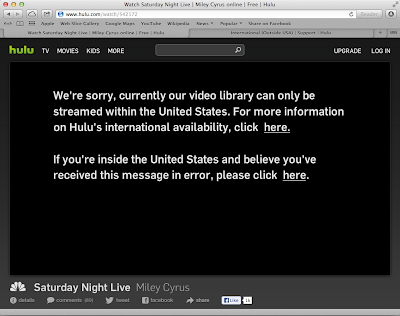 But what about smuggling technology? I was fascinated to see the following statement on HULU's web site:


... Please note that Hulu does not work with anonymizers or proxy services. If you’re using such a service, please discontinue its use in order to watch Hulu videos.

I find it interesting that HULU now specifically makes clear that they do not authorise people to use border-breaching technology. As a technical legal matter, this leads me to believe that relevant copyright-owners could (if they choose) take legal action against those who smuggle such content across borders. (But that's a different article.)

So here's the thing: the fact that smuggling exists does not make borders irrelevant. In my opinion, enforcing Internet Borders is (and always will be) a matter of degree. Perfection is not the goal of every border enforcer. The goal of many is to make such enforcement "good enough" for their purposes.
Posted by Rob at 15:00