The Daily Show with Jon Stewart, a bastion of political liberalism, enforces geographic sovereign borders on the cyber frontier. This border enforcement, on behalf of a well known defender of free speech and democratic values, helps to illustrate the reality of internet borders that exist today.

For those of you who do not follow it (shame on you), the Daily Show is a spirited satire of current US political news with a progressive point of view. As a fan, I am often frustrated that the show's main web site and associated video content are not available from within the UK. The show itself is broadcast on UK television and the UK-localised version of Comedy Central has (what seems to be) a reduced online library of Daily Show videos.

Daily Show videos are often used by US political campaigners to highlight current issues. When my US-resident friends upload a reference to, or attempt to embed, a Daily Show video I often find myself blocked from seeing that video because I am physically in the UK.

So it came as no surprise after I clicked a social network post linked to Upworthy, when I encountered the following all-too-familiar notice: 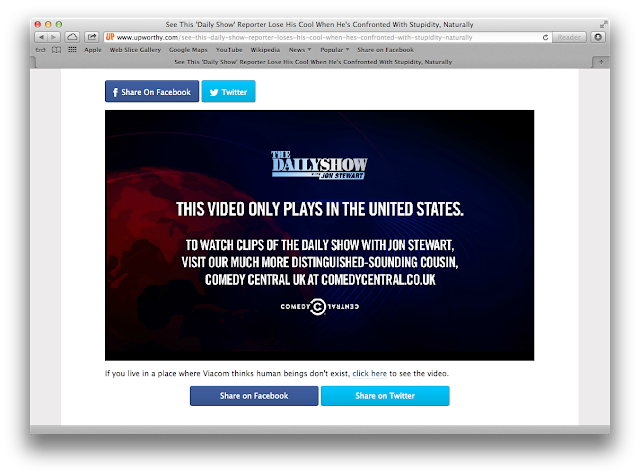 As you can see, the embedded content is inaccessible to those of us who are physically present in the UK.